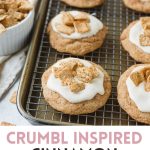 Crumbl cookies are all the rage right now and it’s no surprise that baking them at home is taking off too. When I saw Crumbl’s various “breakfast cereal” cookies that came out recently, I knew I had to replicate at least one. Cinnamon Cookie with Cinnamon Toast Crunch it was!

This copycat Crumbl cinnamon cookie recipe starts with a basic sugar cookie base. The additions of brown sugar and sour cream keep the cookie soft with just the slightest tang.

Scoops of cookie dough are rolled in a cinnamon-sugar mixture, flattened on a cookie sheet, and baked. The cooled cookies are frosted with a smooth and indulgent vanilla-cinnamon glaze and topped with a simple sprinkle of cinnamon toast cereal.

Crumbl Cookies don’t hold back, so these cookies are indulgent and sweet, but oh so fun! Now, if you want to just make some plain cinnamon cookies, that’s fine too. Just leave off the frosting and cereal. Easy!

Ingredients You Will Need

First we’ll mix up a simple cinnamon sugar for which you will need:

Then, we need the ingredients for the crumbl cinnamon cookies:

Finally, we’ll whip a quick cream cheese frosting and top these sweet cookies with a sprinkle of cereal:

Let’s walk through the recipe together!

Super easy! Just mix together sugar and cinnamon and set aside. This amount of cinnamon is perfect for providing plenty of cinnamon flavor without overwhelming the cookies.

I skip the silicone mats and line my cookie trays with parchment paper.

Whisk together the flour, cornstarch, baking powder, salt, and cinnamon until fully combined and set aside.

Next up, cream together the very soft butter and sugars. After they are well incorporated, beat in the egg and vanilla extract. Then, add in the sour cream, mixing until just combined.

Fold the dry ingredients (flour mixture) into the wet (butter mixture) until just combined. The dough will be a little wet/sticky, but still manageable.

Divide up the dough into 16 cookies (about 50g or around 3 tablespoons each). Roll each cookie dough ball in the cinnamon sugar mixture, place on the cookie trays (eight to a large tray works well), and flatten to about 1/2″ with your fingers or a flat-bottom glass.

These cookies bake for right around 12 minutes, but keep a close on them because every oven is a little different.

Soften cream cheese and butter and whip with a hand mixer. Add in the confectioners’ sugar and whip until light and fluffy, about two minutes. Next, add the vanilla extract and stir to combine, then slowly add whole milk until desired consistency is reached. Sprinkle in a pinch of cinnamon for a pretty speckled glaze.

Don’t go overboard with the frosting/glaze. There’s just enough for 16 cookies (although you might lose a cookie or two like I did if you have eager taste-testers visit your kitchen!) and if you add too much it’ll feel too sweet.

After frosting, sprinkle with a topping of Cinnamon Toast Crunch cereal and enjoy!

These cinnamon cookies are great served warm or cold. If you don’t plan on eating all the cookies right away, it’s best to store the cookies unfrosted because the cereal will become soft and chewy after sitting on the frosting for a few hours.

When ready to frost and eat, just warm up the frosting for a few moments in the microwave, spread on the (mostly cool) cookies, and top with the cereal.

Alternatively, you could also store the cookies frosted and then heat up an individual cookie to slightly soften the frosting (10-30 seconds in the microwave) and add the cereal topping. Also note that the cookies can’t be stacked without marring the frosting once frosted.

Can I Skip the Cereal?

For sure! If you’d rather just make a plain cinnamon cookie instead of the full Crumbl Cinnamon Cookie experience, feel free to leave off the frosting and/or Cinnamon Toast Crunch cereal topping. 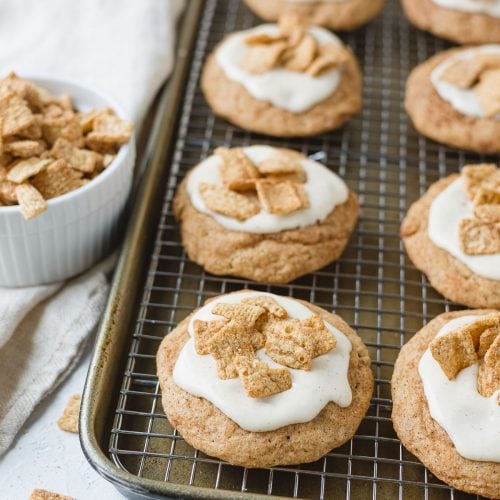 How to store these cookies: Unfrosted cookies (preferred storage method) can be stored for up to three days at room temperature in an airtight container. Frosted cookies can be stored in fridge for up to three days. They do not stack (the frosting is too soft) so it’s easiest to store them unfrosted. If stored with the cereal topping the topping won’t stay crisp (it’ll become soft and chewy from the frosting). Freeze unfrosted cookies for up to 4-6 weeks. Frosting Notes: Can be made ahead up to a few days in advance and warmed in the microwave before topping the cookies. Recipe for frosting makes about 3/4 cup. Cookie size: I opted to make these cookies a little smaller than the Crumbl original. Rather than 4-4.5″ inches, these cookies are about 3″.
Tried this recipe?Let us know how it was! 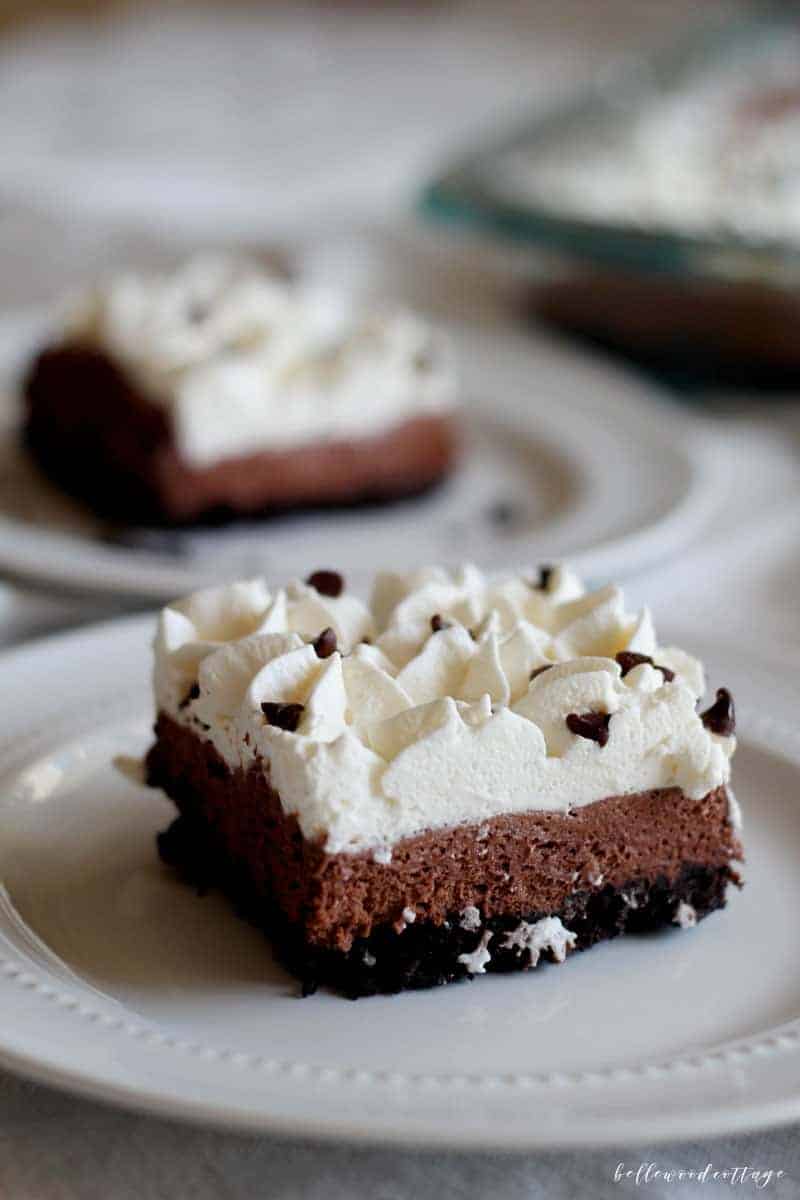 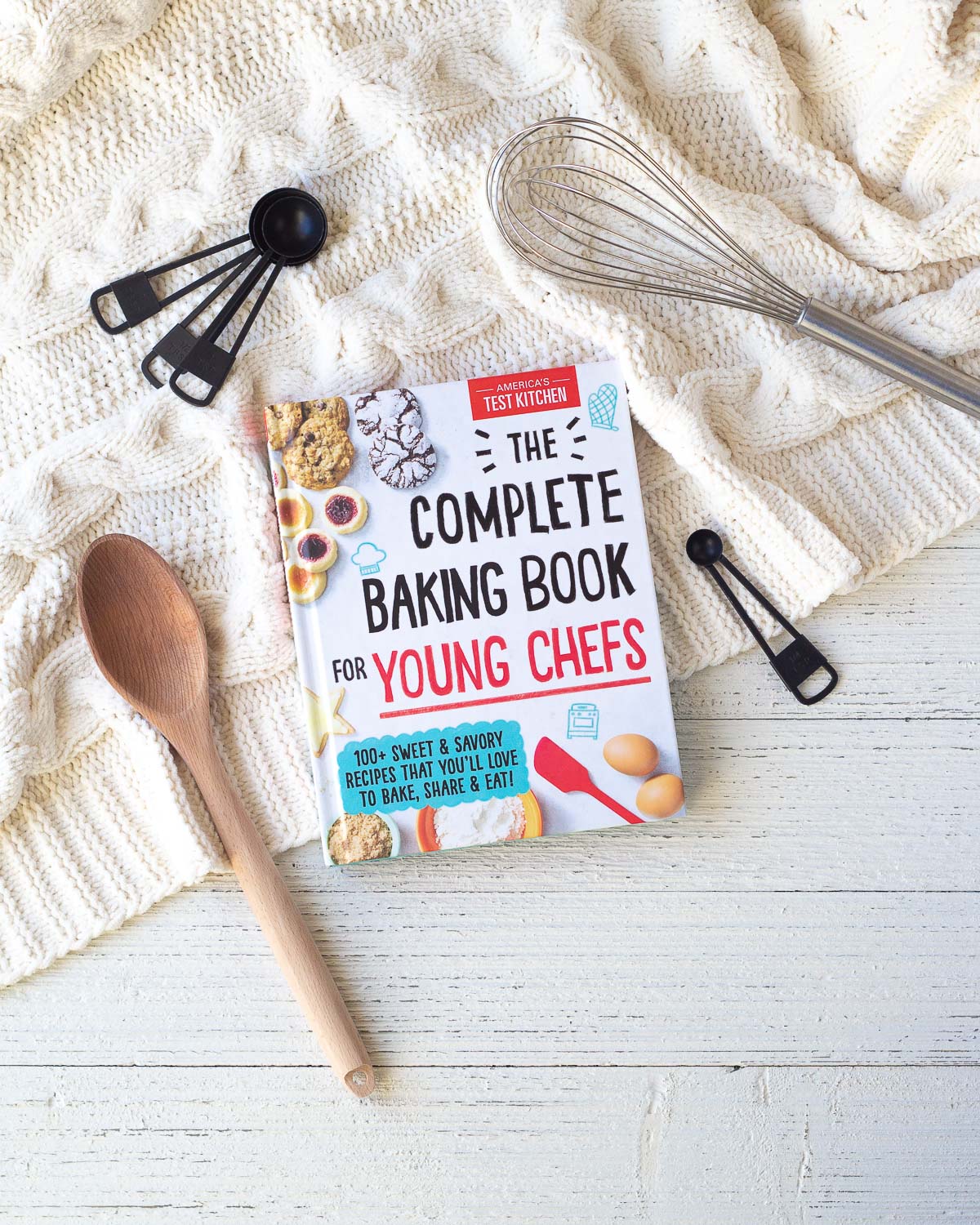 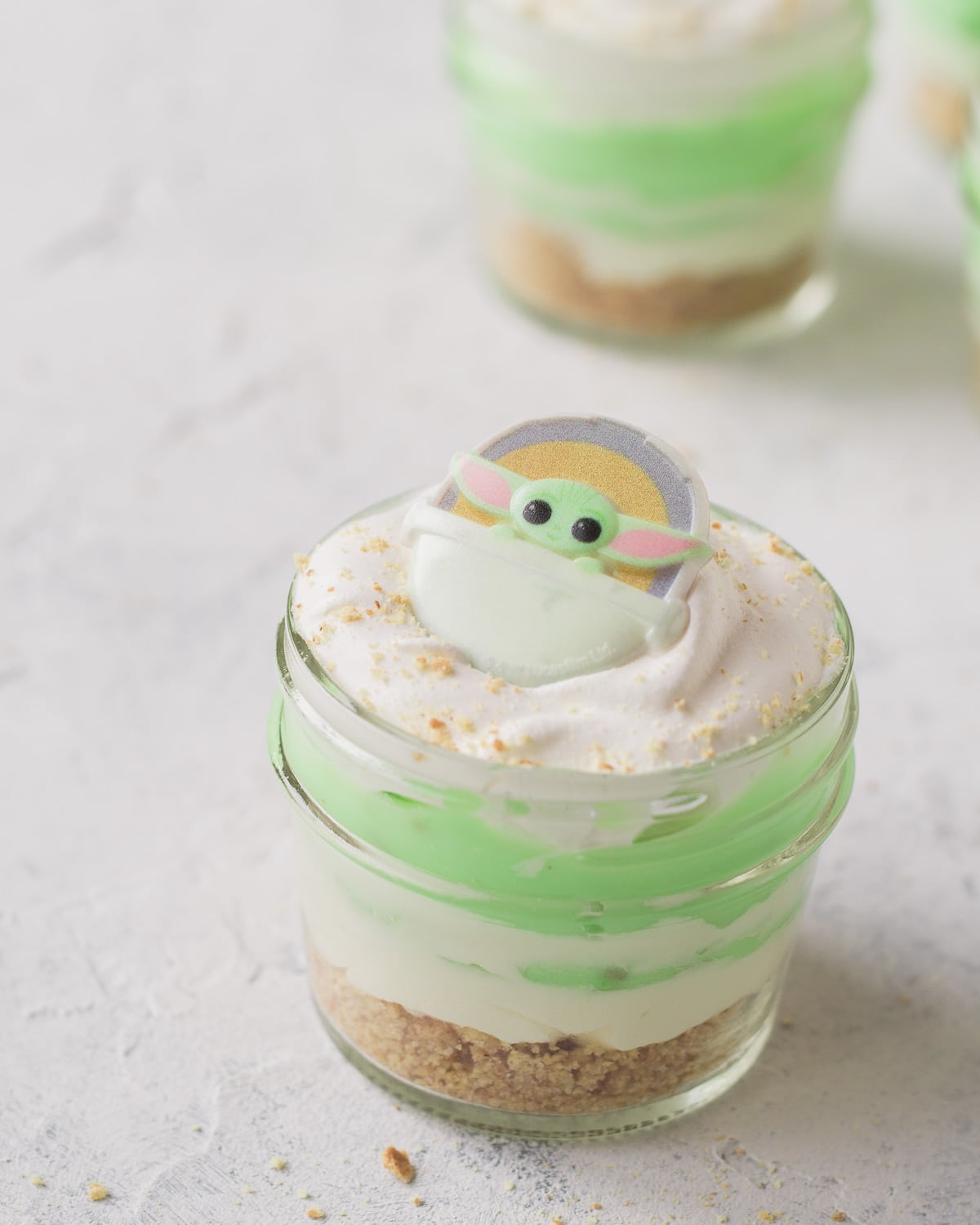 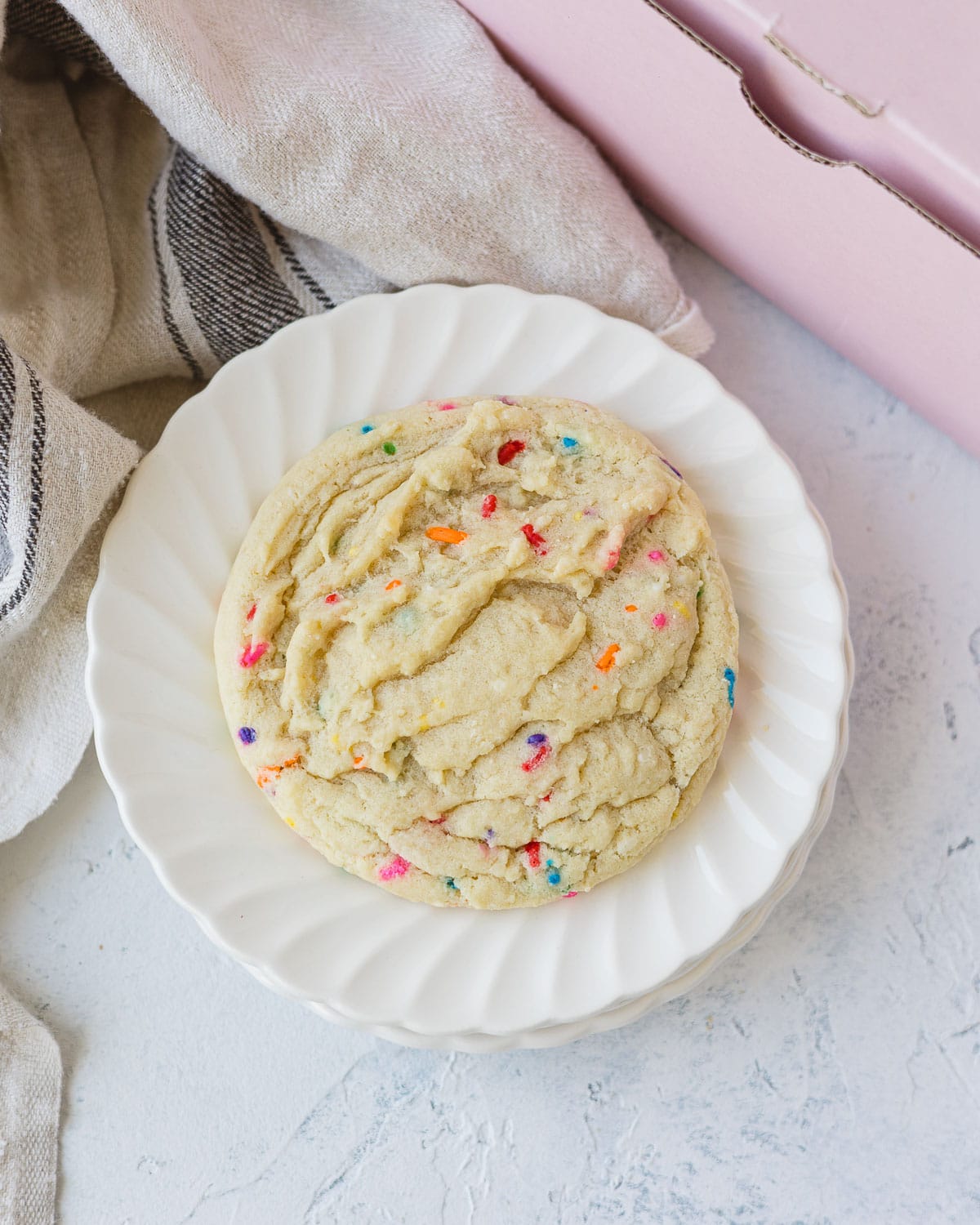 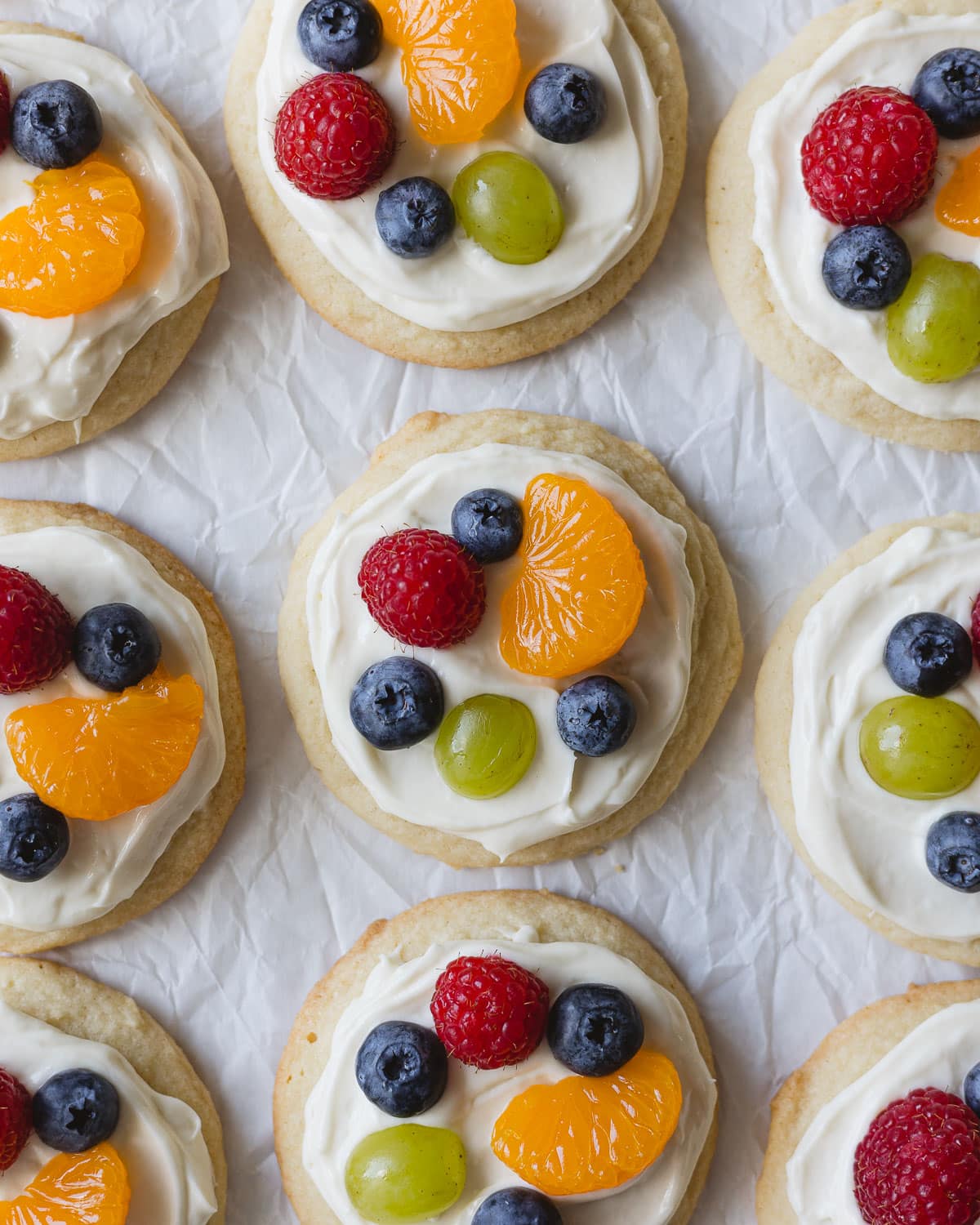